A downloadable game for Windows

The Spirit Ship is my entry in the #iwanttocreate Clickteam 2 day jam. I hope you enjoy playing it! :)

Swapped game for download only, due to a scrolling issue when using arrow keys up and down in the browser html 5 version. The download price is 0.00, so please download and enjoy!

On the title or game over screen, use X to continue to the next screen.

Stay on the title screen to read the game's Super Cheesy intro.

- Shoot enemies to send them to the afterlife.

- Crash or get shot to trigger your Spirit World Engine, swapping yourself into the spirit realm.

- Use your Charge Shot (hold and release x) to kill the spirits, charging your weapons level.

- In the Spirit World you will automatically "cool down" and shift back into the real world if you dodge spirits enough.

- Be extremely careful, crashing in the spirit world is game over.

Story (in case you don't want to read the title scrolling version) :

Mankind has been locked in a losing battle against an alien race. The mars colony base Hope is the last military post between the Plague and Earth. But mankind has a final Ace up their sleeve.

Due to recent breakthroughs in understanding the spiritual realm, scientists have built a superweapon capable of collecting the power of soul energy. However, the manufacturing plant has been destroyed, leaving humankind with only the prototype ship. It has never flown before.

You are the lucky pilot who must put it to the test. No pressure. The fate of mankind rests in your hands.

Never in my life have i shot missiles at bacteria

Got a new final version up for ya, with better transitioning ghost mechanics. Enjoy!

Thanks for checking it out! 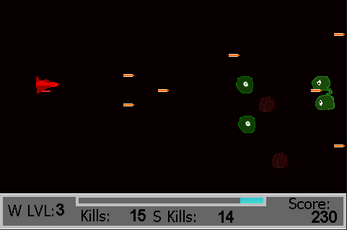